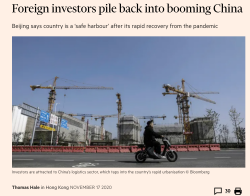 Dr. Jean-Marc F. Blanchard, Founding Executive Director of the Mr. & Mrs. S.H. Wong Center for the Study of Multinational Corporations, was interviewed for a Financial Times story examining China's continuing success in attracting foreign direct investment (FDI) despite Covid-19 and political tensions between the United States and China. The story highlighted China's continuing economic growth, strength in particular economic sectors like logistics, and opening of certain sectors such as financial services as drivers of the positive inward FDI data. Outward FDI presented a different story and has not approached the highs of 2015 to 2017 for multiple reasons, two of which were, as Dr. Blanchard noted, sensitivity about capital outflows (which still persists to some extent today) as well as a crackdown on some private Chinese companies such as Anbang and HNA that had been big players in China's OFDI surge during the aformentioned period.