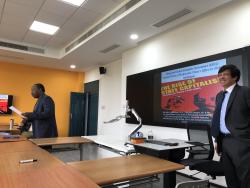 On May 8, the Executive Director of the Mr. & Mrs. S.H. Wong Center for the Study of Multinational Corporations Dr. Jean-Marc F. Blanchard was invited to give a talk for the University of Ningbo Nottingham China (UNNC) Faculty of Humanities and Social Sciences’ Distinguished Speaker Series. Dr. Blanchard spoke about China and Global Economic Governance (GEG), specifically focusing on China’s stance towards inward foreign direct investment (FDI) as a way to gauge the extent to which China is a status quo, revisionist, or revolutionary player with respect to GEG. Looking at China’s behaviors, Dr. Blanchard argued China is a slightly revisionist player, a fact made all the more noteworthy because of the generally substantial macroeconomic, sectoral, and other goals inward FDI (IFDI) helps China realize. Dr. Blanchard attributed China’s revisionist stance to both material and ideational political and economic goals at the domestic and international level such as Beijing’s strong stance on national sovereignty, national security considerations, and desire to move the country up the value-added chain. During Q&A, Dr. Blanchard noted the situation for FDI is worrying because China’s rising economic capabilities reduce its need to treat FDI in accordance with extant the global governance system for FDI.