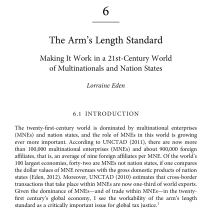 Multinational corporations (MNCs) are dominant actors in the global economy and play an extremely prominent role in world exports through intrafirm trade. Given this, the workability of the arm’s length standard (ALS) is a critically important issue for global tax justice. The ALS is the core norm that underlies the pricing of transactions within MNCs for purposes of determining corporate income tax payments in the home and host countries where the MNC operates. The ALS requires that transfer pricing be based on the prices that unrelated parties would negotiate if they were engaged in the same or similar transactions under the same or similar circumstances as the related party transactions. There are mounting criticisms against the ALS. First, it is argued MNCs engage in abusive transfer pricing to reduce their tax burdens. Second, it is very difficult in practice to apply the ALS because of a lack of data. In this piece, Dr. Eden delves into these issues at great length and points out a number of misunderstandings about what some of the real problems are. She further offers a number of reform/policy proposals to address these issues by, among other things, reducing the incentives for abusive transfer pricing, improving the data available to do comparable transfer pricing, and increasing data collection and reporting.

*****This uncorrected proof piece is posted with the gracious permission of Dr. Lorraine Eden, who is an Advisory Board member of the Mr. & Mrs. S.H. Wong Center for the Study of Multinational Corporations. The final appears in Thomas Pogge and Krishen Mehta, Global Tax Fairness (Oxford: Oxford University Press, 2016).

*****Posting of this report does not represent an endorsement by the Mr. & Mrs. S.H. Wong Center for the Study of Multinational Corporations and has been done to facilitate research and promote debate about multinational corporations/FDI in and from East Asia.