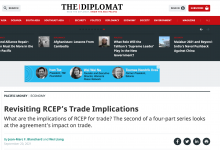 This Op-Ed, published in The Diplomat, represents the second in a four-part series contemplating the consequences of RCEP. It specifically reevaluates the trade implications of the Regional Comprehensive Economic Partnership (RCEP), which most forecast will have transformative effects on trade within and without the RCEP zone. The piece presents the positions of both the optimists and the pessimists, highlights various limitations to their arguments, and ponders the distributional as well as sectoral effects of RCEP, which are neglected or insufficiently treated in most discussion of RCEP's trade ramifications. Among other things, the Op-Ed argues that one should not be overly optimistic or pessimistic about RCEP's trade effects, that the status quo in terms of the region's dominant merchandise and service trade providers will persist, and that middle players like Vietnam and Australia may gain, respectively, in trade and services, albeit within limits. It further suggests that passivity will not suffice: the changes flowing from RCEP will not eliminate the need for businesses to analyze carefully how they can profit from it; lower tier countries such as Cambodia, Laos, and Myanmar will have to up their game through various economic reforms; and that further reforms will be needed for RCEP to deliver a new trade order.

Register for Chinese seaports in Europe and the Americas