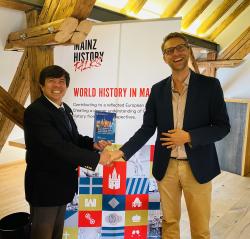 In late August, Dr. Jean-Marc F. Blanchard, Founding Executive Director of the Mr. & Mrs. S.H. Wong Center for the Study of Multinational Corporations (Wong MNC Center), presented a paper on “The US-China Global Economic Rivalry and Europe” at the workshop on “Europe in an Era of Intensifying US-China Rivalry” (Ingelheim, Germany). In his paper, Dr. Blanchard examined United States (US)-China and Europe-China geoeconomic tensions past and present and the tactics the US and Europe had and have been using to advance their geoeconomic goals vis-à-vis China. He found many convergences in American and European interests and measures and identified various political and economic ways the two sides might work together, if they so choose, on China-related geoeconomic matters. Dr. Blanchard also presented a copy of China’s Maritime Silk Road, Africa, and the Middle East, a Wong MNC Center orchestrated publication, to Dr. Sebastian Biba, the organizer of the workshop.