Mr. & Mrs. S.H. Wong Center for the Study of Multinational Corporations orchestrates successful workshop on Chinese seaports in Europe and the Americas 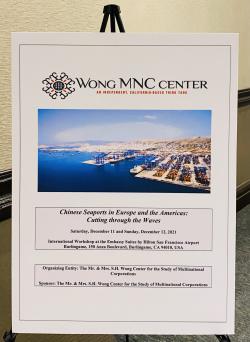 In mid-December, the Mr. & Mrs. S.H. Wong Center for the Study of Multinational Corporations (Wong MNC Center) hosted a workshop entitled Chinese Seaports in Europe and the Americas: Cutting through the Waves in the San Francisco Bay Area (California, USA). This 1-1/2 day workshop, also organized and sponsored by the Wong MNC Center, drew leading academics, researchers, and policymakers from Brazil, Denmark, Ecuador, Germany, Italy, the United Kingdom, and the United States who discussed what Chinese companies were doing in European and Latin American and Caribbean ports in the United Kingdom, Greece, and the Netherlands, provided information about the economic, employment, and political effects of Chinese involvement, and contemplated the responses of 3rd party actors such as the European Union and the implications of those responses. The workshop highlighted the necessity of considering port conditions, domestic political factors, and several other factors to grasp more deeply what is transpiring as well as similarities in patterns across multiple cases. Workshop participants highlighted the benefits of more focused Chinese seaport studies and the prospects for greater insights that might flow comparative study in and across countries and across regions. Drawing upon this workshop, the Wong MNC intends to orchestrate several publications.