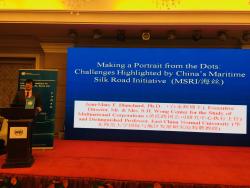 On April 18, 2018, Dr. Jean-Marc F. Blanchard, Executive Director of the Mr. & Mrs. S.H. Wong Center for the Study of Multinational Corporations gave a speech at a United Nation's Industrial and Development Organization (UNIDO) conference (in Shanghai, China) entitled "Fostering Inclusive and Sustainable Industrial Development (ISID) in the New Silk Road Economic Belt: Leveraging potentials of Industrial Parks, Zones, and Cities." The title of Dr. Blanchard's speech was "Making a Portrait from the Dots: Challenges Highlighted by China’s Maritime Silk Road Initiative (MSRI)." In his speech, drawing upon his extensive knowledge about the MSRI, Dr. Blanchard stressed the need to ensure, among other things, that New Silk Road Economic Belt (NSREB) connectivity elements were truly connected and multi-directional, that the NSREB emphasizes "sectoral" rather than other types of agglomerations, that host countries build up their absorptive capacity and China work with them to expand forward and backward linkages, and that NSREB participants work to ensure the NSREB was attentive to sustainable development. He also highlighted a number of ways that the aforementioned end goals could be realized.