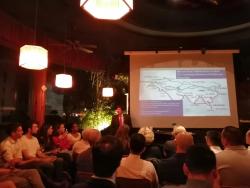 On May 29, Dr. Jean-Marc F. Blanchard, Executive Director of the Mr. & Mrs. S.H. Wong Center for the Study of Multinational Corporations gave a speech entitled “Belt and Road, Neither Boom nor Bust: The Continuing Relevance of Politics and Economics” for the popular “China Crossroads” Talk Series. Dr. Blanchard addressed the heated debate about if China’s Belt and Road Initiative (BRI) is booming, on the road to stagnation, or, worse, failure and sought avoid the problem of overly broad BRI treatments by concentrating on China’s Maritime Silk Road Initiative (MSRI). Dr. Blanchard presented statistics on China’s trade with, foreign direct investment in, and contracting with MSRI countries in Africa, Middle East, Southeast Asia and South Asia that demonstrated the MSRI was not yielding impressive results, though the situation seemed better with respect to contracting. Dr. Blanchard also presented information on the MSRI in four countries, two in Africa and two in the Middle East. Dr. Blanchard showed there were successes and failures depending upon the political and economic context. He argued policymakers should not be so anxious about the MSRI and recommended businesspeople neither assume the MSRI/BRI would deliver great results nor there were no benefits to be had.