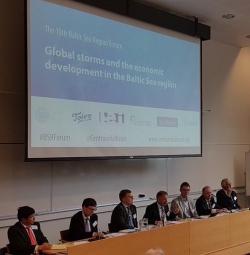 At the end of May, Dr. Jean-Marc F. Blanchard, Executive Director of the Mr. & Mrs. S.H. Wong Center for the Study of Multinational Corporations (Wong MNC Center) participated in a panel called “The Art of Attracting Investments and Doing Business in the Baltic Sea Region” at the international 10th Baltic Sea Region Forum orchestrated by the Centrum Balticum and held in Turku, Finland. On the panel, which involved academics/researchers, investment promotion professionals, and policymakers from Finland, Russia, Sweden, the United States, and elsewhere, Dr. Blanchard shared his thoughts about the drivers of East Asian investment in the region and regional countries, the policies countries in the region might adopt to attract more East Asian investment, and the collaborative initiatives that Baltic region countries might embrace at the regional level to attract more East Asian investment. The lively discussion following the panel demonstrated the strong interest in the panel theme.